Heston Rifle look like five regular people. That’s why it’s all the more confounding when they pick up their instruments, and without a word let loose a barrage of deep melodic noise both beautiful, unorthodox, and seemingly of another sonic realm. Over skittering drums, vicious repeating rhythmic phrases, and a wandering violin that conveys ghostly expanses and tragic insistence, these NY sound sculptors create crescendos for an urgent future. It’s post-rock without the presupposition of easy listening.

What To Do At Time Of Accident… is the band’s first full-length; fifty dark minutes of musical tension and release that calls to mind Dirty Three, Mogwai’s more chaotic moments, and even the entrancingly organized chaos of Glen Branca’s orchestras. They’ve cast aside much of the over-thought filler material that clouds similar efforts, and focused on the driving heart of the songs. Recorded throughout 2004 in a number of NYC studios and remixed with perfectionist ears and a continuous flow of new ideas, the result is strikingly original and at times, almost unsettling. Live, the band continues to re-invent, with thunderous readings of their epic passages and total aural explosions that erupt with no warning at all.

Heston Rifle has already made their initial impact, with 2001’s “20Strings” EP (Innerflight Records) and a consistent touring schedule that has dragged them back and forth across the states and Canada, performing with the likes of The Arcade Fire, The Constantines, Dianogah, Explosions In The Sky, The Mercury Program, Beans, John Vanderslice, Skeleton Key and Taking Back Sunday. They’re four dudes and a lady with the unique ability to capture critical ears, blow their share of minds, and win the hearts of a Canadian town or two. Listen closely; it’ll freak you out. 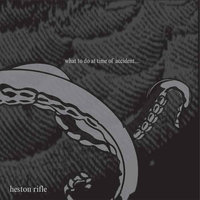 Heston Rifle - What To Do At Time Of Accident...