Having spent several years carving their teeth on the road with the likes of The Sadies, Sloan, Hayden, The Weakerthans, Calexico and Nick Cave, Toronto's Cuff the Duke are poised to make the jump from indie-scene-darlings to bona-fide Canadian music icons. Their new album, Way Down Here was co-produced by Blue Rodeo's Greg Keelor at his beautiful barn studio in rural Ontario and features the band's most mature, captivating and impressive collection of songs to date.

Cuff the Duke started out in Oshawa before making the move to Toronto in 2002. Their debut album, Life Stories for Minimum Wage was released on Three Gut Records, at the time one of the most exciting indie-labels in Canada. Their second and third albums, Cuff the Duke and Sidelines and the City respectively, were both released on Hardwood Records alongside label mates Basia Bulat and Hayden.

Having played in venues ranging from Canada's small clubs to many of the country's largest arenas and concert auditoriums, Cuff the Duke have earned their road stripes -- and now with the release of Way Down Here, they are sure to earn a place in the hearts of music lovers everywhere. Watch for it in the USA in January via The Ernest Jenning Record Co. 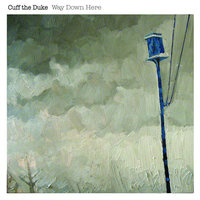 Cuff The Duke - Way Down Here