If there's still a few scattered embers of the fire of '80s punk, hardcore and the birth of D.I.Y., they are burning inside Bomb the Music Industry! Formed by Jeff Rosenstock as a bedroom project reaction to the serious business machinations of his former band, BTMI! was never supposed to sell over 10,000 records or tour the world. They weren't supposed to headline festivals or drive their van over 300,000 miles. At the core of the band is the kind of reverse-careerist leaning that's more at home in a vicious thrash-crust-death-horror-rap-band. Instead, it's dressed up like Elvis Costello or Rivers Cuomo, a self-deprecating bunch of punks playing smart-ass pop songs. Oh, and giving it all away for free on the internet.

Since 2004, Rosenstock and a rotating cast of guitarists, keyboardists, drummers, bassists, mandolin players, horn players, and assorted weirdos have been writing and recording music under the Bomb the Music Industry! banner. And every single song has been released by Rosenstock's own Pay What You Can online-only label, Quote Unquote Records. It's a choice that predated Radiohead or Nine Inch Nails, and it didn't stop the band from selling thousands of physical records, endearing them to a fan base who recognized that BTMI! were a band that actually respected and trusted them. That Scrambles, the band's last record, has been downloaded over 60,000 times, isn't half-bad, either.

When you look BTMI!'s history through that lens, it makes sense that Vacation, their latest full-length, will be a split release from Brooklyn indie Ernest Jenning Record Co. (also home to two of Rosenstock's other bands - Pegasuses-XL and Kudrow) as well as the first release through the band's own label, the freshly-minted Really Records. A further step away from the band's entrenched punk origins, Vacation will resonate with fans of bands like Titus Andronicus or The Thermals, ethically punk bands who take the genre and run in a totally new direction with it. For Rosenstock and BTMI!, that means thrashing My Aim Is True-style jams through the hive-mind of a group of musicians raised on The Blue Album and old Superchunk. It's punk for guys and girls who love Merge Records today as much as they loved Fat Wreck Chords in high school. It's music that's not ashamed of its past, but isn't interested in reliving it.

Thematically, the band have been moving away from the dark introspection of their past material, with Rosenstock penning many of Vacation's songs while on a free vacation in Belize, hanging out on the beach and, for once, writing songs from a positive, grounded headspace. The optimistic tone of the record suits the band's loose, fun style, and as a result, Vacation has the very real feeling of a band coming in to their own, discovering what they do best and truly being comfortable in their own skin.

Recorded by Rosenstock and guitarist Tom Malinowski at their homespun recording spaces, the record also features contributions from across the country, with friends in bands like Fake Problems, Bayside, Andrew Jackson Jihad, and Good Luck adding to tracks from their own homes, or when they would tour into BTMI!'s homebase of New York City. It's easily the biggest and best sounding record of the band's career, and marks the first time they've enlisted someone outside the band to mix and master, ensuring the final product is seriously massive. 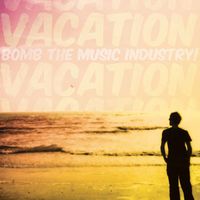