Mary Simich grew up in California in a very musical family. Her big brothers played in Thee Cormans, who dressed up in monster costumes and played garage rock in the true Budget Rock style. For years, Mary was very content with writing songs in secret, until one day she visited some friends in Berlin and ran into King Khan at a grimy Berlin bar called Wowsville. King Khan noticed that she was traveling with her guitar, and asked her to play a song. "The room got real quiet, and Mary started singing these haunting ballads, and I knew I had to record them!" says King Khan. He invited her to his home studio and the rest was history. They recorded all 12 tracks in just a few days.

"I remember Mary being at all my shows for years, she was always the tallest one in the audience. I had no idea that she could write such beautiful music," Khan continued. "There is a timelessness in Mary's music... it makes you feel like the Manson family is lurking, and all the LA black magic folks are wearing their turtlenecks in the hot summer, and there she comes with her classical guitar, and behind her there's an altar where they would sacrifice some cherub, and when she starts to sing, angels fly out of her mouth with harps and bongos, and everyone goes 'AWWWWWW!'"

In a world filled with narcissists and vomit-inducing pop music, Mary's music is the secret elixir straight from the mysterious fountain of youth that she has kept hidden in her mind. Time has no sense or meaning in Mary's world -- there are only hideaways and secret gardens filled with an odd motley crew of hippies, beatniks, satanists, surfers, and way in the corner is Mary serenading them all by a huge bonfire, enchanting them with songs about everything from heartbreak to healing trauma. 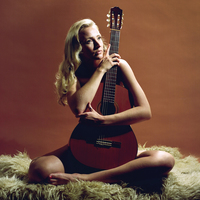 Mary Simich - How Does One Begin